The site for this year’s work has been Margate – city of a rich history, yet struggling with a number of problems nowadays – ecomoic and social.
The solution to these problems proposed by the authorities has been art – by erecting the Turner Contemporary gallery and propagating a new image of a city as an artistic hub the council is trying to turn the fate of the city.
Although the first signs of positive change can be seen, it could be criticized that this new fashionable course does not respond to city’s and its citizens’ problems, but rather tryies to hide them behind the mask of change.
These observations on Margate has been the foundation for the work throught the year.

The first task was preparation of a drawing depicting the city in relation to ‘The Smooth and the Striated’ text – it has been done with an ink on paper drawing.
It was followed by an analysis of the Dreamland cinema and architectural intervention proposed in the building – an inspiration for the intervention has been a ‘bathing machine’ from which an idea of an indirect, muted experience (as muted experience of entering the sea in the machine) has been derived. The intervention had a form of a canvas tunnel through the building – one enters the building, feels its presence yet does not experience it directly – in which artworks would be presented.

The form of the building derives inspiration from bathing machines – a part of history and culture of Margate from the Victorian era – a small carriage, covered with canvas, drawn into the sea, protecting changing and bathing people from gaze of others. The building reinterprets the muted experience of ingressing into the sea with a bathing machine and the ritual of stepping from a bathing machine into the water. Like canvas covering the bathing machine, a rammed concrete external envelope of the building is covering the internal timber structure, protecting it from harsh, seaside weather conditions. The idea of layers and indirect experience is emphasized in the staircase by implementing translucent material on its walls.
The curves with openings on the sides of the building provide more even distribution of glare to the staircase, partially sunken in the hill, consisting for a more smooth experience of transition. They can be reinterpreted as creases of a material, a far echo of the form of bathing machines. At the same time, the longitudal form of the building, facing the sea with the thinner facade, extending to the sides, is interpretation of the forms of Dreamland Cinema and Arlington House – two landmark buildings of Margate. The curves on the wall also respond to the terraced crescent buildings on the seaside of Margate. The external envelope is therefore contextual in both cultural and physical terms.

Currently Margate is facing numerous social and economic problems. The solution that the district council is hoping will result in prompt regeneration of the city is promoting its new image as an art city – an initial step of this strategy was opening of the Turner Contemporary, followed by number of smaller, private galleries openeing in the city.
Nonetheless one can argue, that the art that is supposed to help regenerate the city does not actually engage with its problems and citizens. The programme of the theatre is supposed to be a response to this condition.
With the programme focused on a given problem of Margate, a creator is invited – this might be an artist, as well as a group of children from a local school. They create a painting or an installation in connection to the problem, that is later rescaled and hung and used as a background for the plays and discussions taking place in the theatre. Openings introduced on the front and back of the building result in the double-sided artwork being visible apporaching the buidling from both sides. Along with this solution, light boxes are implemented on the front and in the staircase, on which lettering can be set up, introducing the current programme to the citizens. This way art is directly engaged with the city, experienced by passer-bys, while the building becomes a statement in hands of an artist and the community.

The objective of the primer project of the ongoing third year was to design a small-scale public intervention in form of a theatre – ‘internalised public room’ – in connection with an existing seating structure on a seaside of Margate.
The site of choice is situated on an edge of the hill, with the seating structure on top, its form somewhat reminescent of a portico of a temple, in proximity to the Turner Contemporary gallery.
The initial idea for the site, and the core of the following project, was providing a connection between the two seaside levels, reintroducing the lower promenade, currently rundown, to the city.
The solution for combining the theatre function with the forementioned public circulation is inspired by a section of a form of anctient amphitheatres, where the audience and circulation operated on multiple leves. A public staircase is drawn between levels, theatre located directly above it, accessed on the sides of the stair.

The ideas explored in the first semester have been followed in the Final Project.
The main narrative has been based on an image of the city created by artists – throughout its history as a resort city perception of Margate has been shaped by imagery such as paintings, etchings, postcards and even caricatures. The idea for the building is to provide space where local artists could produce and exhibit art enaged directly with community of Margate and its local problems – their own images of the city that could voice opinions and even start debates.
As artists become the voice of a local public, the communities of Margate, often excluded from the public debate, could become one of ‘subaltern counterpublics’ defined by Nancy Fraser:
‘I propose to call these subaltern counterpublics in order to signal that they are parallel discursive arenas where members of subordinated social groups invent and circulate counterdiscourses, which in turn permit them to formulate oppositional interpretations of their identities, interests, and needs.’
Hopefully providing local artists with appropriate production and exhibiton spaces could start emancipation process of the communities, resulting in voice of these people becoming an important part of public debate.

After specyfing conceptual direction of the project, an appropriate form had to be found. The volume of the building is derived form the context of the whole city – oblong, vertical forms of Dreamland Cinema tower and Arlington House – as well as from the direct immediate surrounding. Along the Northdown Road, two church spires are located, constituting focal points in the perspective of the street. Therefore a slender, vertical tower is implemented on the southern facade in order to respond to this condition. In contrast to the vertical language of the facades and spires of the Northdown Road, the facades of the Athlesan Road all have a rectangular shape. To address this condition, the slender spire facing the Northdown road is ‘extended’ along the Athlesan Road, resulting in rectangular facade responding to and ending the run of the buildings along the street. The volume of the building is therefore a result of combining two different characters of surrounding streets on a corner site.

Construction of the building follows on the idea of layering, consisting of monolithic concrete construction and timber frame. The concrete core of the building accomodates vertical circulation and is extended horizontally on the first two floors to accomodate supporting functions of the building – an auditorium as a place for lectures, play and discussions and an archive, where artworks produced in the building could be stored, the collection being a transcription of character and identity of the complex and Margate’s artistic production.

This concrete construction is surrounded by timber frame, of which artists’ studios and gallery are constructed. The facade language is dicated by the rhytm of columns, as in etching technique density of lines is used to give different areas different characters – an attempt to merge logic of frame construction with artistic inspiration.
The studios are located on two first floors. A lightwell has been introduced into initial rectangular, deep plan to provide more natural lighting in the spaces, resulting in a U-shaped, flexible space. The gallery is located in the tower, consisting of three rooms, one above another.

The main narrative of the project is the path that a visitor takes through the gallery. Once they enter the building through a concrete gate and move up towards the gallery, they are deprived of any direct view outside – with the openings located above the walls surrounding gallery rooms, there is a connection to the outside world, but the only view the visitor is facing is the view of artists, who through their work reflect on the city and outside world. The idea of indirect experience, derived from bathing machines, followed in previous works, is realised. Only on the top floor, one opening allowing a view outside is introduced – standing in contrast to the enclosed gallery, this window becomes a grand gesture on the inside and on the outside in form of a concrete ‘room within a room’, supported on a massive column extending through all of the preceding floors. This singular view stands in contrast to images of the city shaped by the artists, induces reflection and becomes the crowning point of the journey. 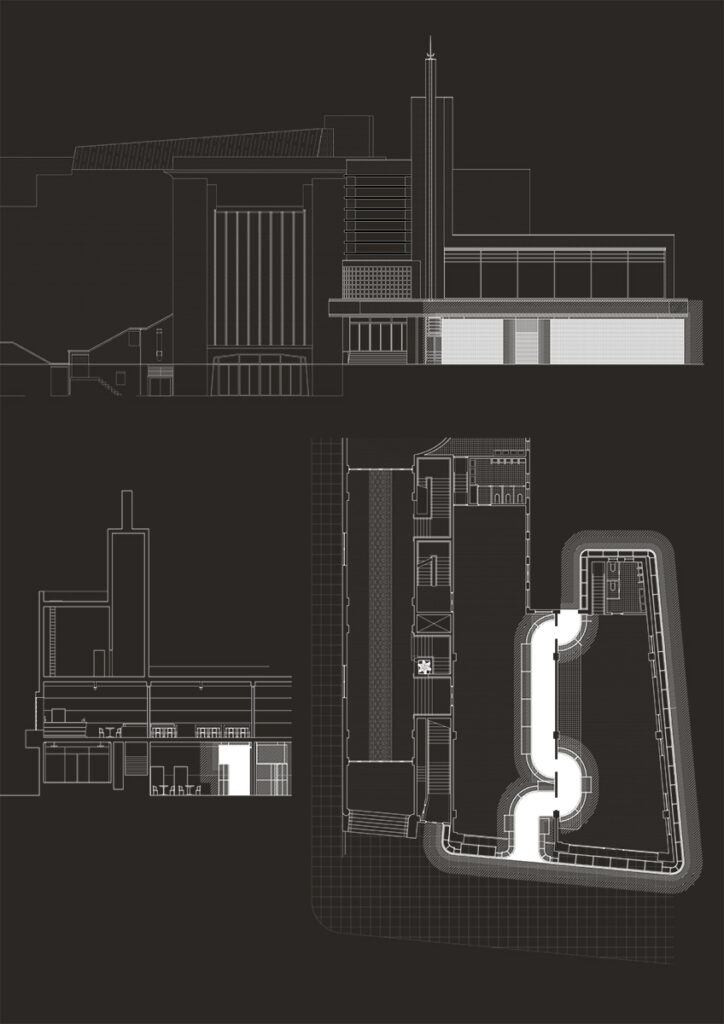 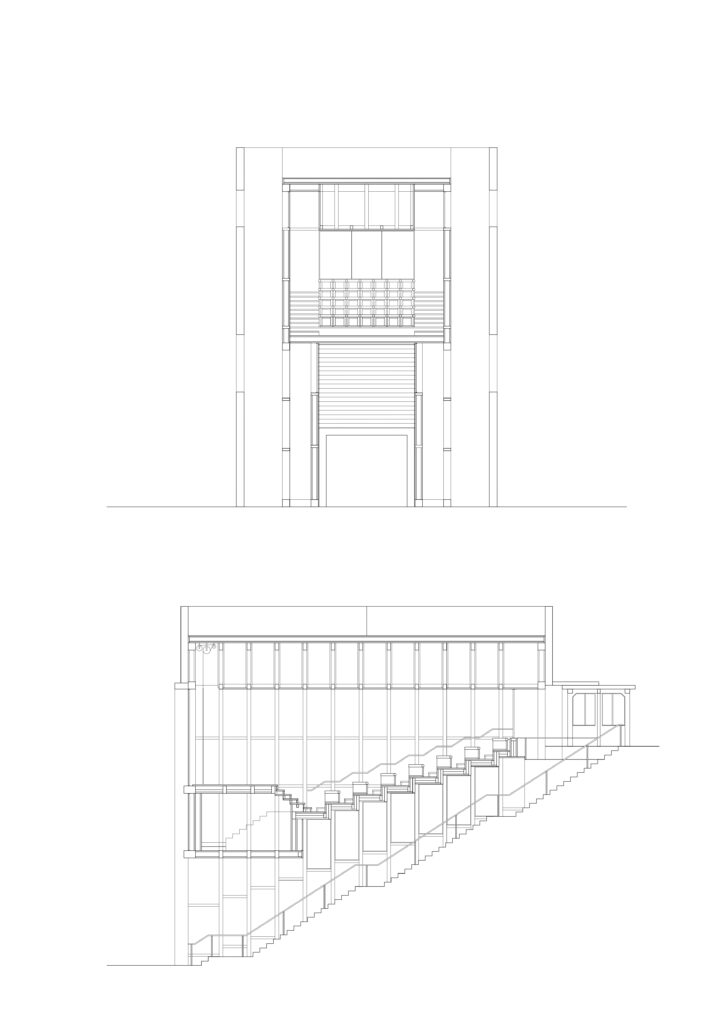 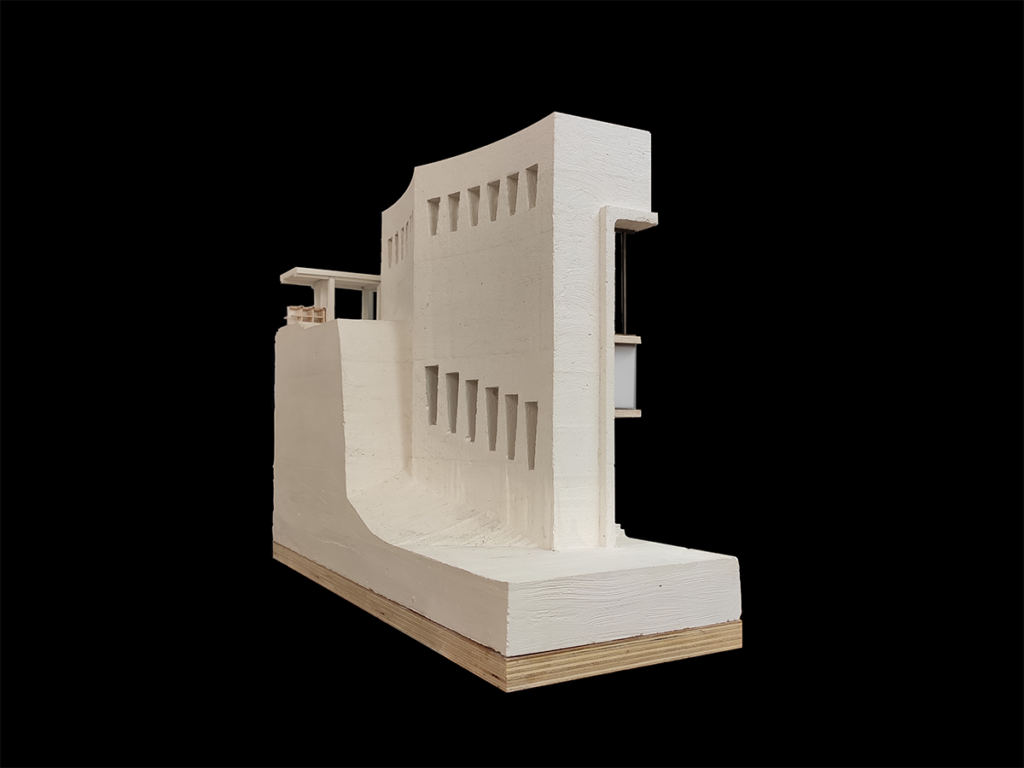 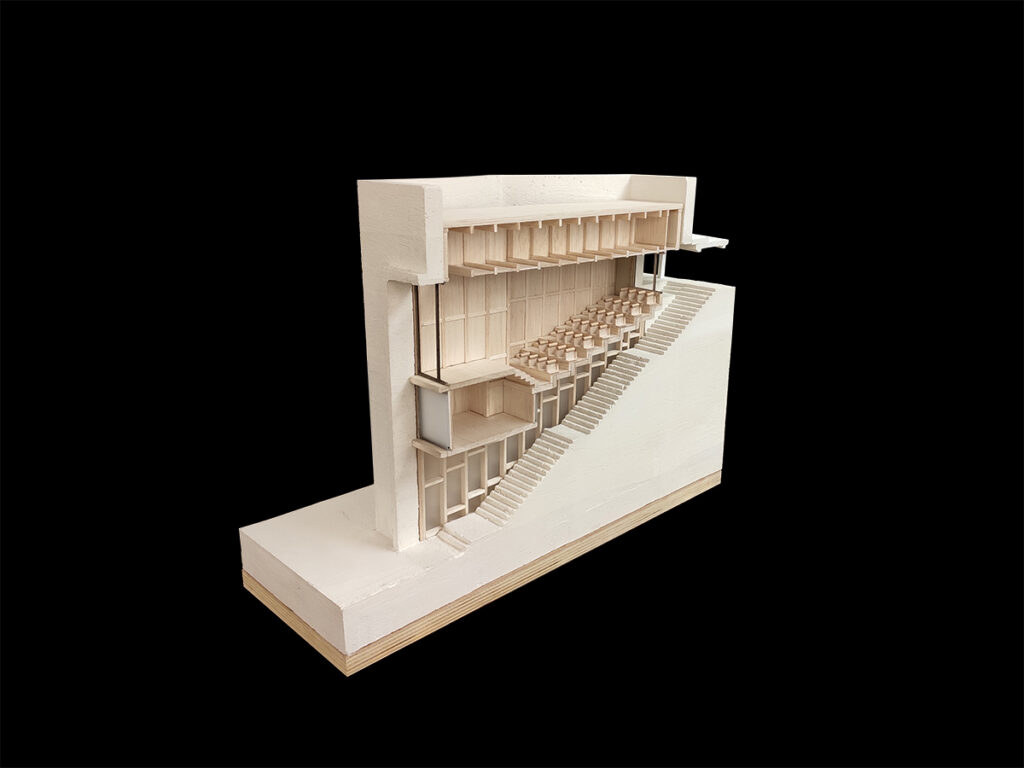 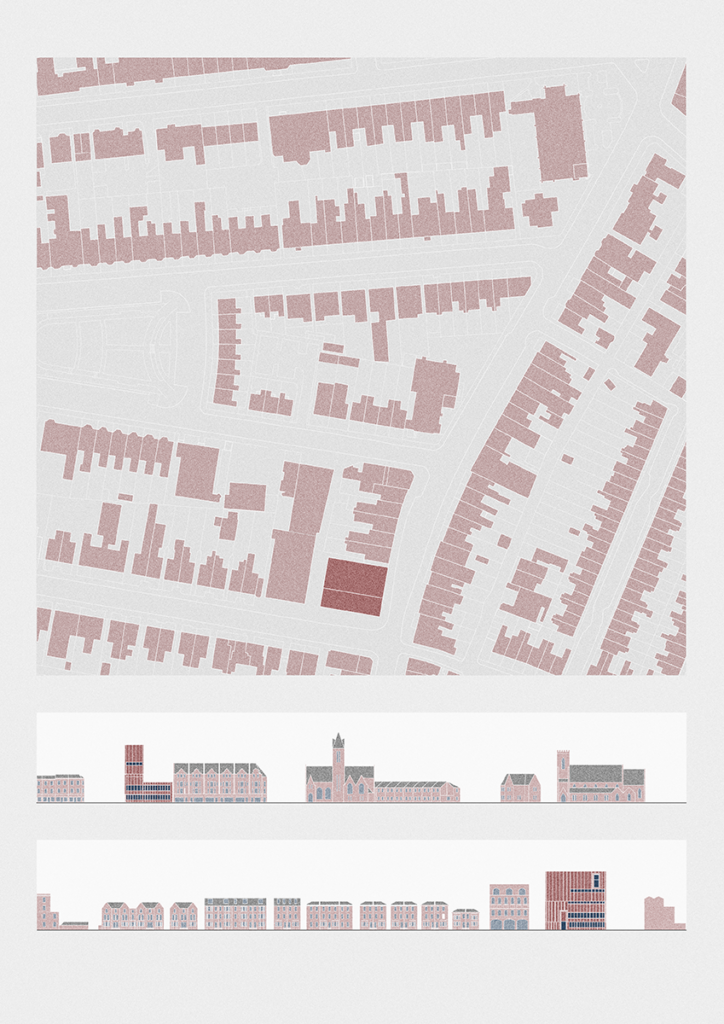 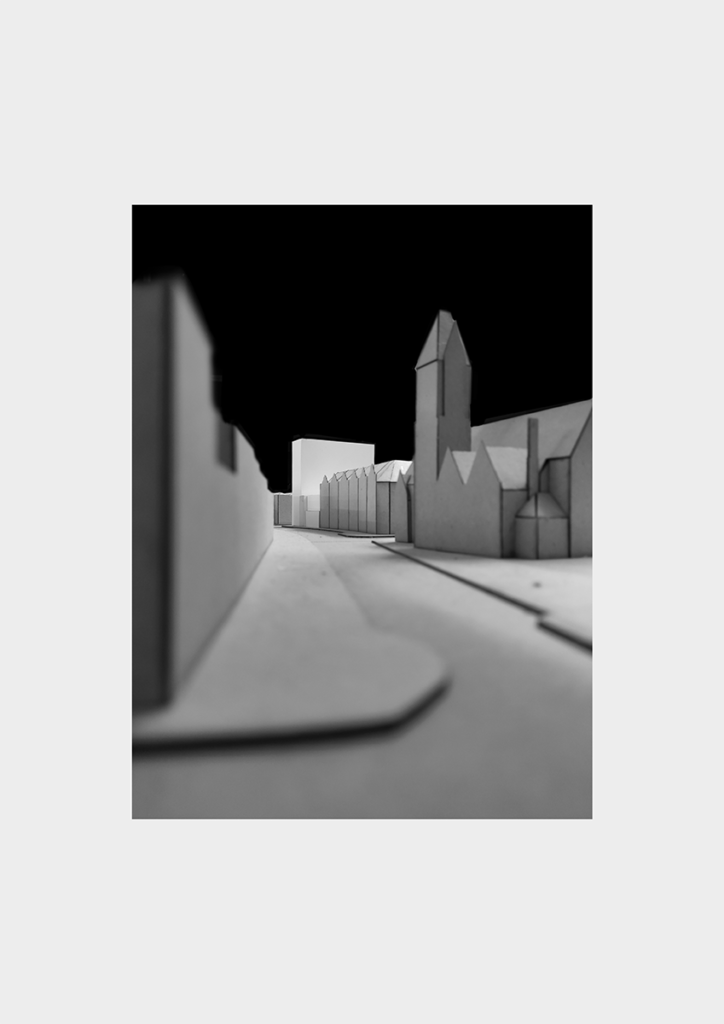 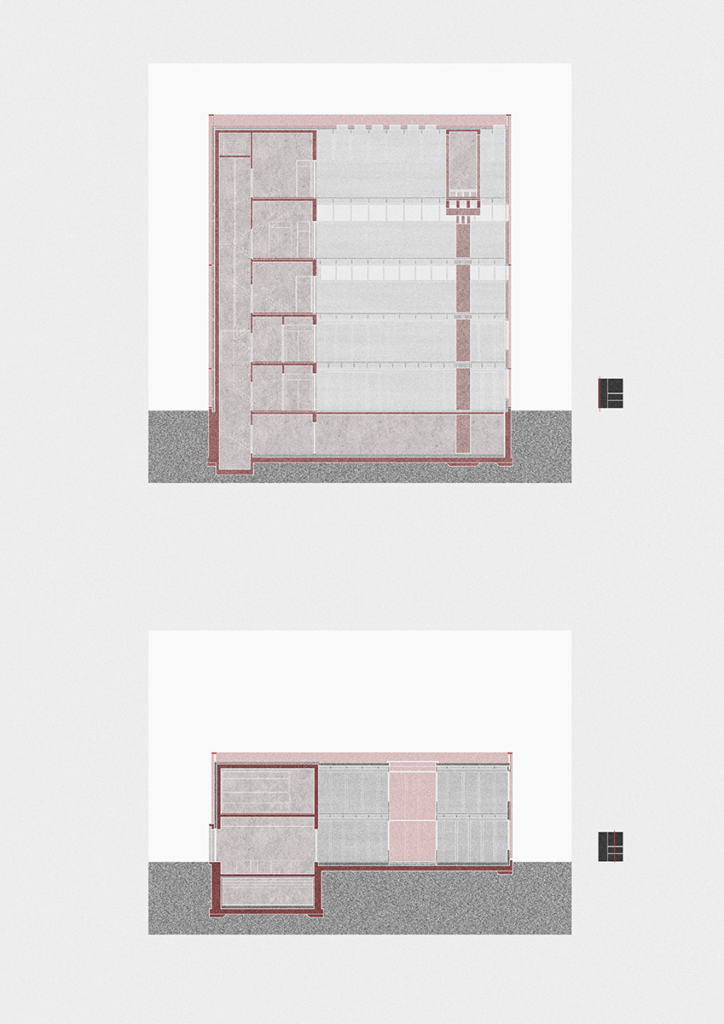 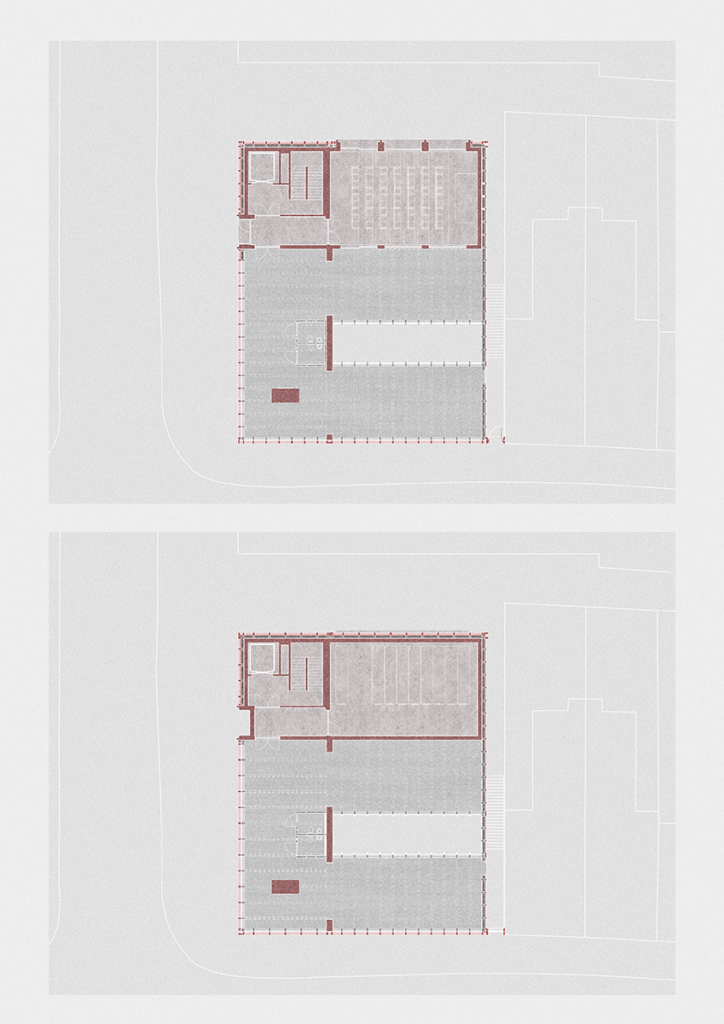 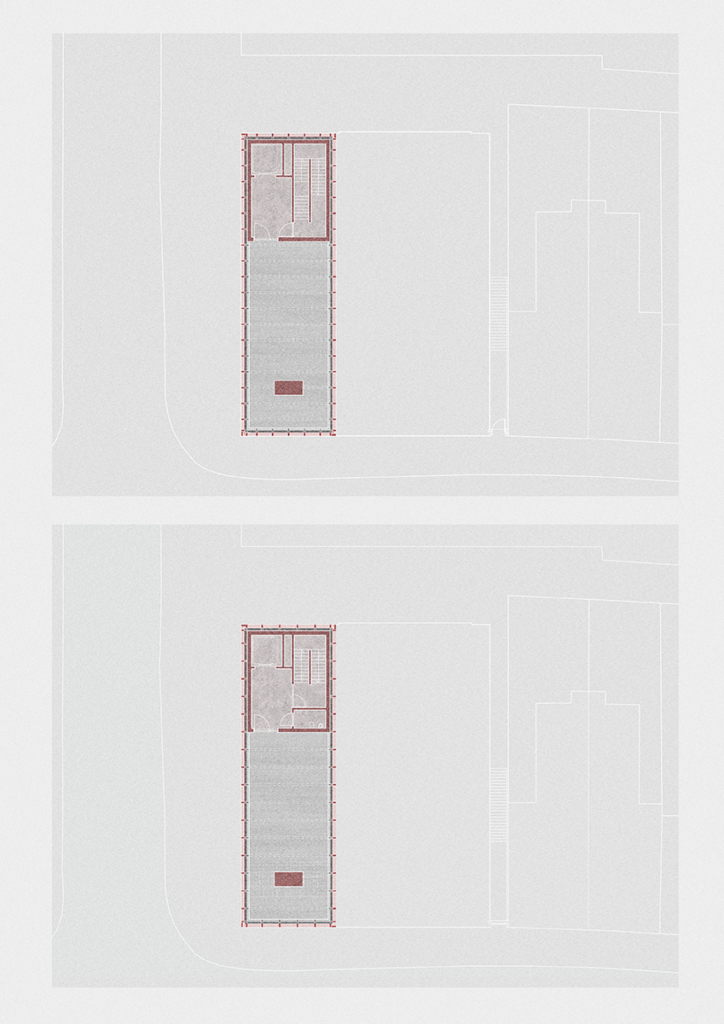